This has been a very big week for both my current bus (the one we live on now) and my vintage bus (the one we’ll live on in the future). Let’s start with the current bus. After leaving Palm Springs I made what I thought was going to be a one-day appointment for the bus to get a front chassis repair. We arrived Monday morning at the Prevost shop and they took the bus in soon after. In order to inspect the underside of the bus, they raised it six feet in the air. Karen and I had to use a ladder to get in and out! The good news was that the components that I thought were in need or repair were fine. The bad news was that they found a multitude of other problems, relating to other suspension components. Major things needed to be removed and replaced, and to top it all off, they also discovered my tag tires (one of the sets in the back) were shot and needed to be replaced. So, we’re replacing the front steer tires and will put the old steer tires on to the tag axle. I thought we would be at the shop for one day, and here we are a week later, still in the midst of repairs. 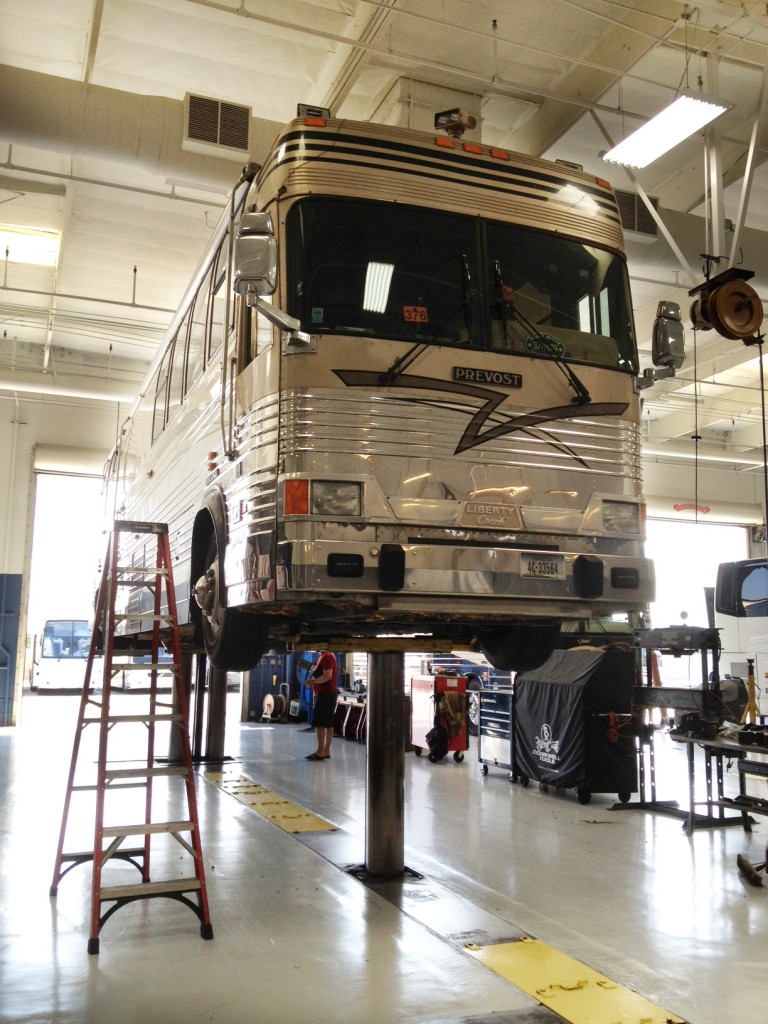 The bus gets lifted up for all the work that’s been done. Karen says it’s been like living in a tree house because we need a ladder to get in the door!

The cost of all the repairs was the obvious downside to all this. There were, however, a few positive things in this whole scenario. First of all, the folks at the shop are just great. They are incredibly friendly, knowledgeable and accommodating. When they would start work on the bus at 6:00 am, they’d just come out to the parking lot, let themselves in and drive the bus into the shop… while Karen and I were still sleeping in the back. We are NOT morning people, so we were VERY appreciative of this! The other nice thing is that they are allowing us to keep the bus here for a while (there are RV hookups on site). This will seem like more of a bigger deal when I get into the vintage bus story.

Speaking of the vintage bus story, let’s just dive into that, shall we? If you read this blog a lot, you know that I also own another bus… a 1963 Flxible Starliner. The restoration process has been going on for two and a half years, but when it’s finished, it will feature a retro look on the outside with a streamline design/high tech interior. For the past year, it has been in Fort Worth, Texas, getting the engine and tranny worked on, as well as the tanks and body work. Its next stop will be Nova Scotia, where Craig Dorsey will work his magic and create the interior with the style I want. I’ve been greatly anticipating the day where the bus will be deemed drivable and ready to move on from Fort Worth. Well, I finally got word this week that it’s ready! I didn’t waste any time. I booked a Wednesday flight to Texas and started planning my route north. I also have a lot of major decisions to make in the next few days, many of them involving the purchase of appliances like the refrigerator, air conditioners, etc. Karen is going to fly to her parents’ place in South Jersey, and I will have all these things shipped to her so that I can pick them up on the way to Nova Scotia. Needless to say, the next few weeks will be very interesting! While Karen and I are away, the current bus will stay at the Prevost shop. This is really convenient, as we wont have to pay for an RV park while we’re not even on the bus.

Aside from all the bus drama this week, we were actually able to get out and have some fun! We headed to Universal Studios for a few hours one night and we did the studio tour/ride as well as the indoor Mummy roller coaster. We’ll head back there again this week to spend an entire day. We also spent a day visiting some wineries in Temecula. We didn’t realize we were so close to such a great wine region until one of the women here at the shop told us about it. We did tastings at three different wineries, all of which were pretty good. 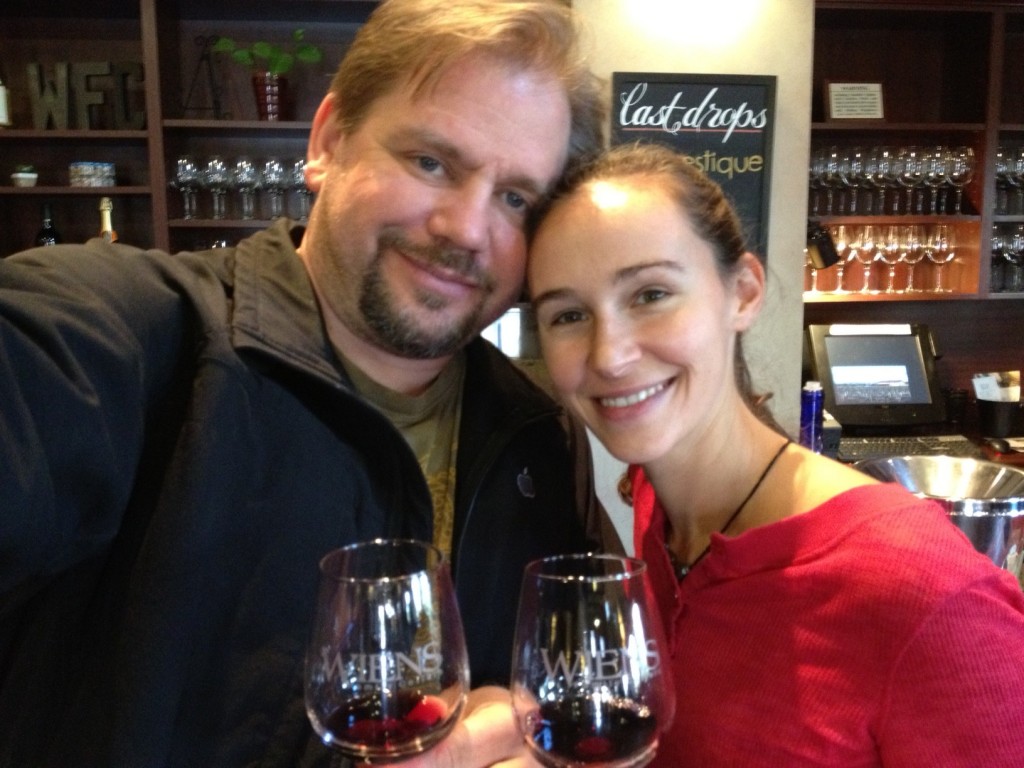 Karen and I enjoy a tasting at Wiens winery in Temecula, CA.

We also met up with our friend and photographer, Sean Mahoney, for an awesome night of light painting. I had been wanting to try out a technique that involves burning steel wool, but I hadn’t been able to find an appropriate and safe place to do it. Sean came up with an excellent locale, which was under a train bridge and far enough away from any road that we could be seen from. (you really don’t want to attract attention when spinning around burning metal.) It was definitely an adventure, in that there was some climbing involved (in the dark) and the results were fantastic! Afterward, we went out to dinner and spent the entire meal brainstorming new tactics for perfecting the steel wool shooting. 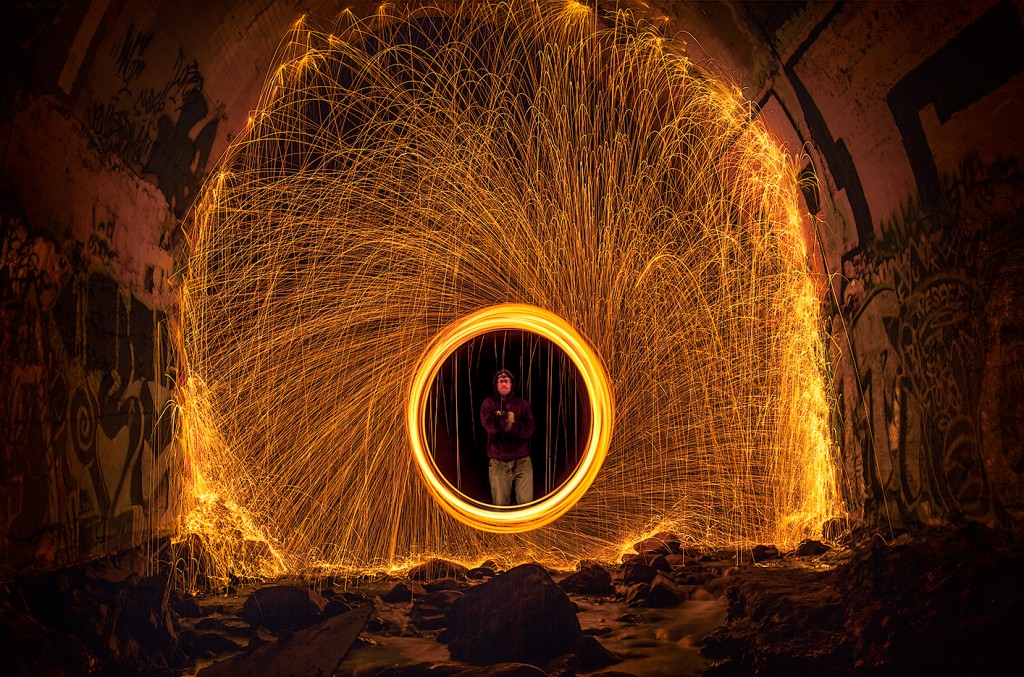 This is my favorite image from our night shoot. That’s Sean spinning the steel wool.

Next stop: Fort Worth!  More to come!