Iceland has always been one of my favorite places to explore and go shooting. In fact, I’ve been there at least six times! One of the things that sticks out to most people who visit Iceland is the sheer number of waterfalls. It’s hard to go a day in that country without photographing at least one waterfall. And many of them are just spectacular.

Lately, I’ve been revisiting and processing more of my photos from previous Iceland trips, many of them waterfall images. I posted three of them below, and they should give you an idea of how big these natural wonders are. In the last photo, you can even see a tiny person standing near the foot of the falls.

I have a lot of tips for shooting waterfalls. In fact, I’m even writing an e-book on the subject. But here’s a quick tip I’ll leave you with now. There are three things I always carry with me when shooting waterfalls and can often be crucial to getting a decent image. 1. A tripod: Waterfalls usually require longer exposures, especially if you want to get that silky water effect. 2. A lens cloth: If you’re shooting close to the water, chances are you’re going to get a lot of spray, and little droplets on your lens could mean the death of your image. 3. A neutral density filter: I don’t always need this, but it’s come in handy more times than I can count. This filter will let you shoot with longer shutter speeds, even during bright days. You need longer shutter speeds to get the silky, water-in-motion look. (I used ND filters in two of the three shots below). 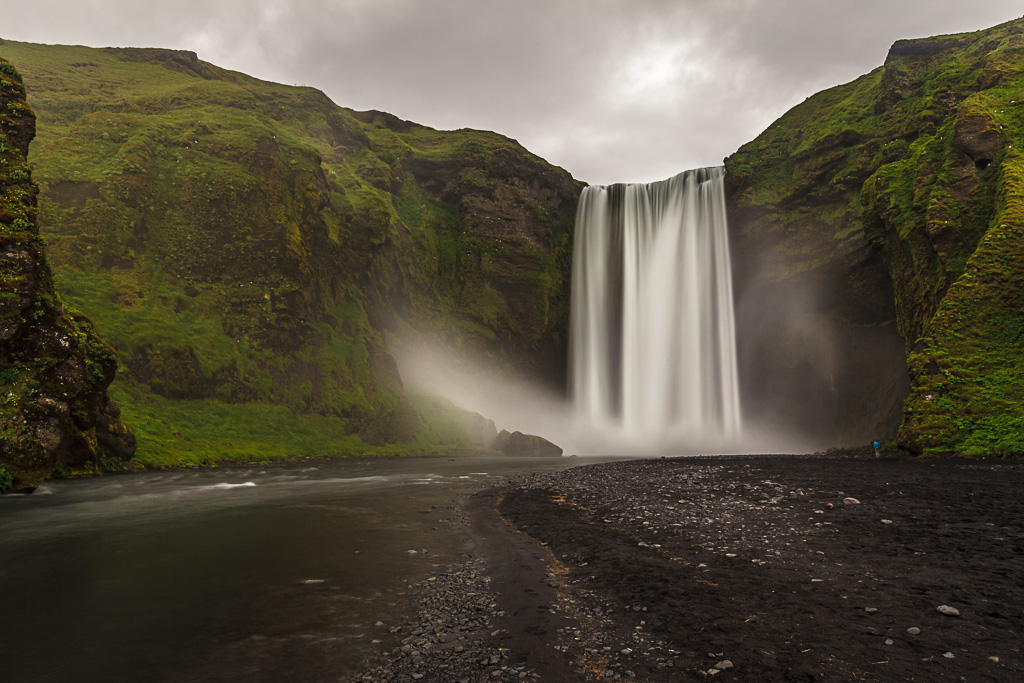 Join me in Iceland

I’ve got two photography workshops in Iceland coming up in 2013 and I’d love for you to join me there.

Iceland’s winter landscape offers amazing opportunities for photographers. Ice caves, frozen waterfalls, light painting and the northern lights are just a sample of what’s in store for you in this amazing country. When we’re not in the field shooting, we’ll be in a classroom environment, editing and refining our images. Click here to learn more.

Get ready to discover one of the most beautiful places on Earth. Iceland features black sand beaches, waterfalls, geysers, volcanos, geothermal features, glaciers, icebergs, lighthouses, turf houses, storybook horses and interesting architecture, all packed into a country that is 1/95th the size of the United States. Click here to learn more

Teaching in the Land of the Midnight Sun

Imagine a landscape of lush rolling fields covered in flowers, pristine waterfalls, never-ending sunsets, beautiful wild horses and green mountains. It sounds like a fairytale, right? Something out of “Lord of the Rings,” perhaps? Believe it or not, this place is very real, and it’s called Iceland. Talk about a photographer’s dream come true! If you’re a photographer (amateur, professional, whatever.), and you visit Iceland, you WILL end up returning over and over again… just like I have. There are few places that I like to visit repeatedly, but Iceland is one of those special places.

We just wrapped up a week-long photography workshop with Focus on Nature called Discover Iceland. During the course of the week, we traveled along the south coast of the country, stopping at over 20 incredible shooting locations. The shooting/exploring was also punctuated by some lecture and critique sessions where I covered techniques for shooting and editing images. The workshop happened during a very interesting time of year. If you’re wondering what this midnight sun thing is all about, here it is: In Iceland, during the summer, it never really gets dark out because the sun sets around midnight and never really gets very far under the horizon before it rises again around 3 am. This makes for some very interesting shooting [and sleeping] scenarios.

Left to right: Ragnar Th Sigurdsson (our excellent local photographer guide), myself, and Einar Erlendsson (The man behind Focus on Nature).

Our group stops to grill dinner in the midst of one of our photo shoots. Here, you can see the rugged vehicle we traveled in during the workshop.

The setup for this workshop was very nice. The group traveled in a very large and incredibly rugged vehicle, maneuvered by Siggy, our awesome driver. Each person had their own row, so it was easy to keep camera gear out and ready. While we were on the road, I would give shooting tips and post-processing techniques (yes, I actually processed images on the move!). There was also my daily session of “How to pimp your 5D Mark II” (most of the workshop attendees shot with this camera.) When we were out shooting, the vehicle would stay open so that we could easily change out gear.

And then, of course, there was Einar. Einar is the man behind Focus on Nature and, while we’re on the road, he drives behind in his truck, aka command central. He is always using some type of device to arrange the details of the workshop. Because the weather and other conditions in Iceland can be so unpredictable, we don’t make many of the arrangements in advance. Instead, we follow the light and make decisions on the fly so that we don’t miss any great opportunities. Einar is constantly toggling weather maps, arranging hotel stays, meals, etc. It’s because he’s there, taking care of all the details, that we can focus on shooting.

But that’s enough about workshop details. Let’s get on to some more images, shall we? The following is a photoloque of the Discover Iceland, 2012 workshop:

Here I am shooting one of Iceland’s many geothermal spots. Iceland is situated in a location where there is a crack in the Earth’s plates and it allows the country to use the resulting heat/steam for energy.

One of Karen’s images from Skogafoss, an incredibly large waterfall on the south coast of Iceland. The group had a great time with this one, because you could actually climb up the hill on the right side of the waterfall to get interesting vantage points.

The two above images were shot in the town of Vik. We stopped here because the place is just so photogenic. There, you’ve got rustic buildings, Icelandic horses, the beach, and of course, that picturesque church on the hillside.

We stopped to shoot at two different locations where a glacier “flows” into a lagoon. Icebergs break off the glacier and float around, sometimes washing up on the land.

This is where one of the glacier/iceberg lagoons flows out into the ocean.

The two photos above were from a pretty comical shoot. As we pulled up to this field by the beach, Ragnar told us that we would be photographing these beautiful birds, and that it was great because, when you walk out there, they try to attack you! At first we were scratching our heads trying to figure out what was so great about this, but eventually, we found that you get some good shooting opportunities as they swoop down at your head! We got some good images, but the birds did get their revenge on some of us. Some people say it’s good luck when a bird poops on you. If that’s the case, we were a very lucky group!

If you know me, you know that I couldn’t let a whole week of shooting go by without doing some lightpainting! The tricky thing with this time of year in Iceland is that it never get’s dark. In order to keep our scenery dark enough, we had to use much shorter shutter speeds. This turned out to be ok because the type of lightpainting we did involved burning steel wool. When I spun the steel wool around it was bright enough to show up well with shutter speeds of 4-5 seconds.

In one of the above captions, I mentioned the iceberg lagoon that flows out into the ocean. Some of the icebergs eventually wash up on the shore and melt there, creating very interesting shapes and textures. Our group spent a while shooting here.

As a last-minute treat, Einar arranged for the group to take a boat ride out in the glacier lagoon.

We stopped to shoot at this charming little grass-roof church. Iceland has a lot of adorable buildings like this.

These pools were full of a funky green algae that almost gave them a glowing appearance. This was definitely one of those “off the beaten path” locations that you can only get to with a pretty rugged vehicle.

There was one day where we spent a bit of time in the vehicle waiting for a rain storm to pass by. (This wasn’t really a bad thing, because we covered some more shooting tips while we were waiting.) When the rain subsided, we were rewarded with this beautiful full rainbow. This is a rather unique group shot, wouldn’t you say?

This waterfall is called Seljalandsfoss and was the perfect spot to wrap up a full day of shooting. The falls are extremely picturesque and you can even walk behind them!

These very generous Icelandic horses allowed us to photograph them from up close in their pasture. They even had some foals with them that were very curious about our cameras.

Here is Karen, shooting at the Blue Lagoon, which is another geothermal location. These pools were probably 85-90 degrees F! If you’ve been to Iceland you know that the Blue Lagoon is actually a geothermal spa where you can go and swim or get treatments. The area you see above is not part of that spa but it’s still part of the same body of water.

As you probably noticed from the images, we had a pretty great experience. The group was wonderful, and everyone got along great from day 1. I hope to see many of them again in the future, either on another workshop, or during the course of our travels in the bus. We were sad to leave Iceland, but look forward to another future visit. We are actually working with Focus on Nature to arrange two more workshop events in 2013. I’ll announce them here on the blog and at DigitalMastery.com as soon as we have details.