This week, we’ve pretty much been laying low in San Diego. We still dont have our new car (though the Mini is on a ship heading our way!) so we’re parked close to a trolley station that makes it easy for us to get downtown, to grocery stores, etc.

For the holidays, Karen stayed in NJ longer than I did and she flew in early this week. Needless to say, she was very happy to come from 25 degrees and snow flurries to 85 degrees and sunny… and she was even happier to discover that our RV park has a beautiful, large heated pool with whirlpool!

Since we dont have a car yet, we have been spending a lot of time on the bus, working, grilling and enjoying the weather. We did get out a few nights though. On Friday, we took the train to downtown, explored the local restaurants/bars and found some really unique places.

We found a place called the Salt Box and, though we weren’t planning on going there, we couldn’t resist going in because the place just looked well-designed with hundreds of candles and the largest door I’ve ever seen. They had a great happy hour, and we would highly recommend their veggie flatbread.

Thanks to Yelp.com, the night just kept getting more interesting from there. Our next stop was a place called Vin de Syrah, and it had a VERY unique vibe. The door is almost hidden because it’s covered in fake greenery so you have to search for the handle. The interior was very eclectic, with funky high-backed booths and umbrellas hanging from the ceilings. It’s quite hard to explain, so you can check out the tour on their site HERE. 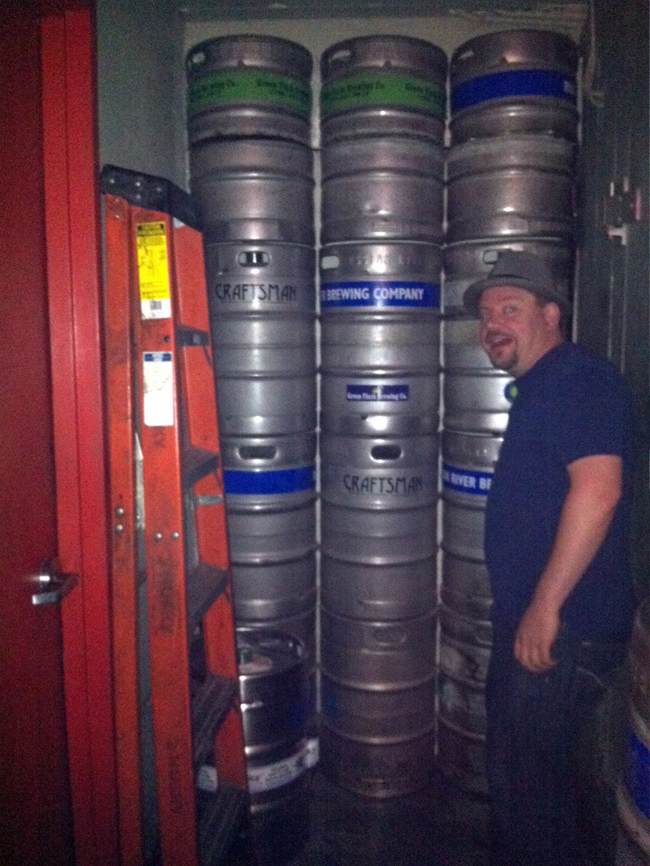 Our last stop took the cake. We found a place on Yelp that was called The Noble Experiment. It had amazing reviews so we decided to go. But here’s the thing. We couldn’t find it. We found the address and went back and forth in the general area of this place but it just wasn’t there. After doing a little on-the-fly research on my iPhone, I started reading about strange directions for getting there. It turns out, this bar is actually a HIDDEN bar that is located inside of another bar. You have to go through this place to the hallway where the restrooms are and look for a wall of kegs. If you happen to push on this “wall” it will make way, like a bookcase in an old-fashioned mystery movie and reveal a hostess in a nicely lit hallway. We learned that the standard way to get a seat in this bar was to send a text message to their number and they will let you know when they’re ready for you. Once we knew this, we did just that and waited in the Neighborhood for a while. Sure enough, we got a text, headed in and were directed to two seats at the bar. The place was small, big enough to fit about 30 people, 40 max. On one wall was the bar and the opposite wall was a row of booths underneath a wall made completely out of gold skulls. This place is pretty much a live re-enactment of what it was like during prohibition. The bar served only cocktails (no beer or wine) and no vodka (that wasn’t around back then). This might sound restrictive, but there were actually 500 drinks to choose from and the bartender did an amazing job of crafting drinks to our personal tastes. I had just recieved a bottle of St. Germaine from Karen’s brother for the holidays and I had never tasted a drink made with it. I told the bartender and he made me an amazing drink using that. We hung out there for a while and actually missed our last train back to the bus and had to take a cab!

On Saturday night, my buddy Mike was having a party at his place and invited us to go. I have known Mike since I lived in Minneapolis, so we go way back! It’s always nice to catch up with him and his wife, Vivian. They had a great catering service that brought in a cart full of excellent taco mixin’s and a nice little fire pit where everyone cuddled up to on the somewhat chilly night. 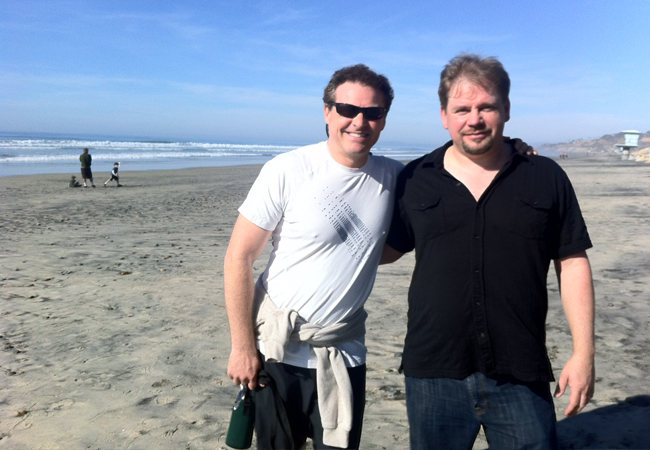 The next morning, we had went for a nice, scenic walk by the beach and Mike took Karen for a ride in his Tesla roadster. She said that her innards were left at the entrance to the highway! (This thing goes from 0-60 mph in just 3.7 sec)

We should be hanging out in San Diego for a while, so there will be more to come from sunny CA!